Toe 4 The Blues in Z Minor 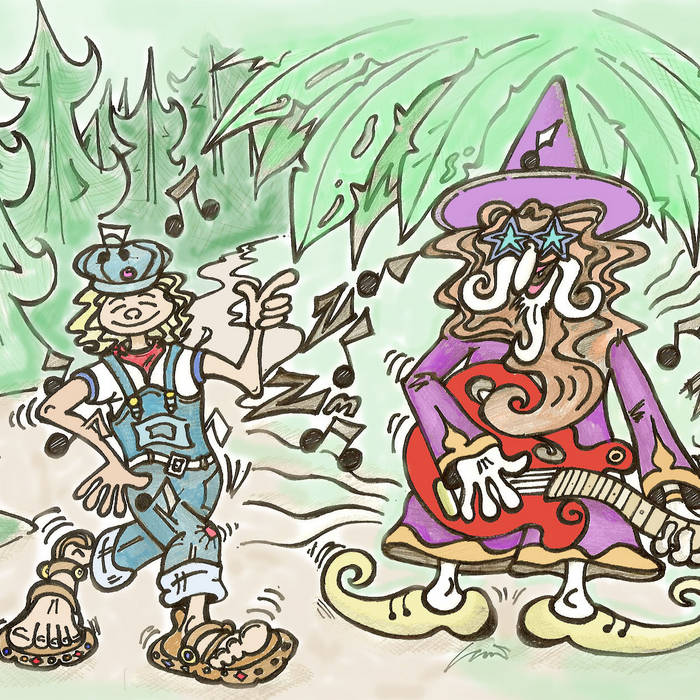 TOE FOUR
By and by and after a -while and awhile, sounds began weaving through the forest. Was it music? The sandals took him towards it. Soon Ephram came upon an old fellow playing the strangest music he had ever heard. The man had a great white beard and leaned up against a giant Two-Tongued Tree. He held an instrument that looked like a guitar but had skin stretched across the top of it. It had a funny smell to it too; like goats. Something in Ephram sort of liked the music as strange as it was. “Excuse me mister but what kind of music is that?” asked Ephram. The old man spoke without looking up. “It’s blues music, special blues music, heh, heh. Sour mashed yummy gummus music in the key of Z. You see the blues in Z minor is not so easy to play, you’ve got to know the notes, they often slip away.” And with that the old man’s fingers moved across the strings to make the most magically strange sounds Ephram had ever felt. Yes felt. He felt the notes in his body. And the sandals moved Ephram’s feet in time with the music. “Ha Hee Mu Muk, Muk Muk!” Ephram giggled as the notes tickled his tummy. Oh, this was yummy. Yummy gummus music. “Now how’d you like to play the blues in Z minor?” asked the old man. “Whaa? But I dont know how,” said Ephram. “Oh sure you do,” replied the bluesman. “It don’t matter what notes you play, or what scales you lay, it don’t matter how you look, or if you get your music out of a sook book! As long as you play and you got somethin’ to say, then hey, lets play it, create it, bake it, rake it, rhyme it, mime it, what time is it in? The notes in-between-the-notes are the best because they make us unique from the rest. The moles hold down the wholes and a calf will cover the halves. A Baboon playin’ a bassoon can play a tune that comes from the moon. It don’t matter what you play, just play, all day. So you see the blues in Z minor is easy to play, but you got to know the notes, they often slip away. Come on now, play a jiggle wif me!” “I, I, don’t know I don’t really know how to play music but I do like the blues in Z minor” said Ephram. “ Oh sure you do,” said the old man. And with that he handed him an out of tune bassoon and together they began to croon. OOOOOMM! Honk! Honk! OOOOOM! They played music that no one had ever heard before….. Suddenly the big time sandals lurched forward and Ephram almost fell over from the movement. The bassoon fell to the ground. “Hey, hey! Wait just a minute! Hey, hey! Where ya goin’ sandals? We were just getting started! I was learning to play basson!” cried Ephram. The sandals force-walked him back into the woods. The blues in Z minor echoed in the distance as the old man just kept on playing by himself.
“I wasn’t done yet, where are we going now?” sighed Ephram. “These sandals seem to have a mind of their own. I wonder if I can talk to them?” thought Ephram. “Hey sandals! Stop right here!” The sandals just squished along the moss and thick duff of the forest floor. Ephram gave up and let them walk him.
Otherwhile, in another part of the forest the Vomus-worm knew something was very wrong. “Ωορμ− Ωηερε_σ μψ σανδαλσ?” (“Worm where’s my sandals?”), the voice asked.
The Vomus worm shook – then nervously laughed, “agggnnnggg.” “Ωηερε_σ μαη σανδαλσ?” (“Where’s mah sandals?”)