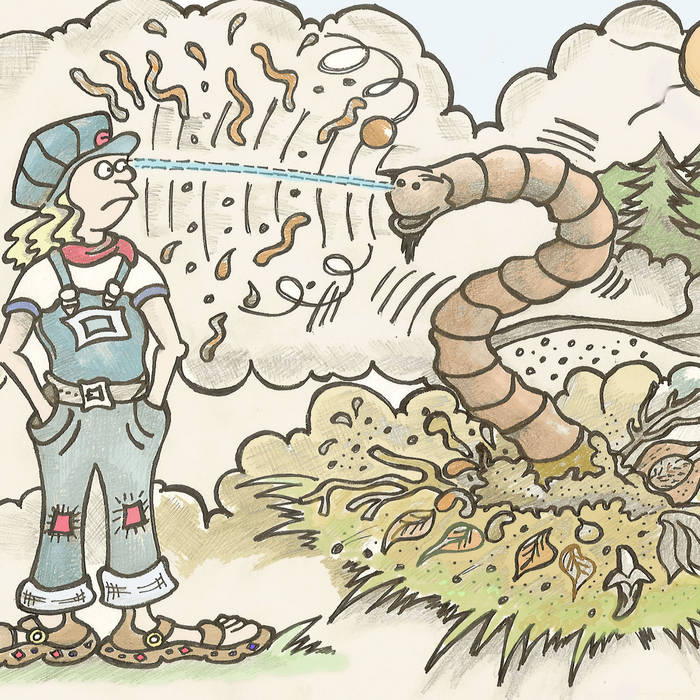 TOE TWO
By and by, and after awhile of miles of walking, Ephram began to hear a strange sound. From deep in the woods came a gurgling, “HA HA HA HAGH HAGHH. Ha aha gng agn.” It was a Vomus-worm laughing near the thicket of smile. “HA HHA HA HA HA HAGHH HAGGHH HA.” It seemed to be covered in a mucus-like slime, had many pink sections and was slightly larger than Ephram. It sat in a giant compost pile. “Oh please sir-worm don’t do me no harm.” Ephram said.
The worm coughed up a spot of fresh soil and said, well he didn’t actually say it with his mouth, it was more like pictures appeared in Ephram’s head. The worm seemed to be speaking to him in vibrations. No sounds but yet there were sounds, no words but there were words. It was a vibratory story.
Ephram felt the vibrations and they painted pictures in his minds eye. It was a vibratory story. There were pictures of dirt tunnels and leaves turning to soil, rotting bark, dead chicken, old bananas… “What?” Thought Ephram. This was a confusing mess. More story coming – other worms, compost piles, more dirt, hard dirt turning to soft dirt, no shirts, happy worms, full bellies, more mucus, more dirt, burping worms… Ephram began to calm down a bit. This worm seemed to be showing him what a worm’s life was like. “O.K,” Ephram said. “What’s all this about?” The worm paused and then spoke out loud from one of the segments. “Ignnn have something important to tell youggh! Worms like to dig into the soil and break it down. They like to break it down and turn it into ground so that the Two-Tongued-Trees have fresh food and minerals to grow. Worms like to break it down. My message to you is break it down! If you ever have a frown on your face, if you ever seem to be stuck in some waste, break it down, break it down! Get down on the ground and do the wild boar boogie! Wiggle around! Your body is made from the ground. Build an earth mound. Make worm sounds. Kiss the dirt! Eat some dirt! It won’t hurt! AHHGG AHHHH HHAgggGGGG.HAHAHAHA!! Break it down.” Ephram understood. The tips of his big time toes began burrowing into the soil and wiggling around. And Ephram did a little dirt dance (it was a bit like he had seen Uncle Pookus Fomp do after the harvest). “AHHH AHHHGG HA AHAHA HAHA!” The worm laughed in-between coughing up spots of soil. “Break it down….” All of a sudden the Sandals moved forward and almost made Ephram fall over. “Hey!” shouted Ephram. But the sandals took him off quicker than a rabbit running Ephram back into the woods. “Ha hee Mu Muk Muk Muk,” He laughed. Behind him the worm just gurgled, “Agggnaaaahhhhaa…”