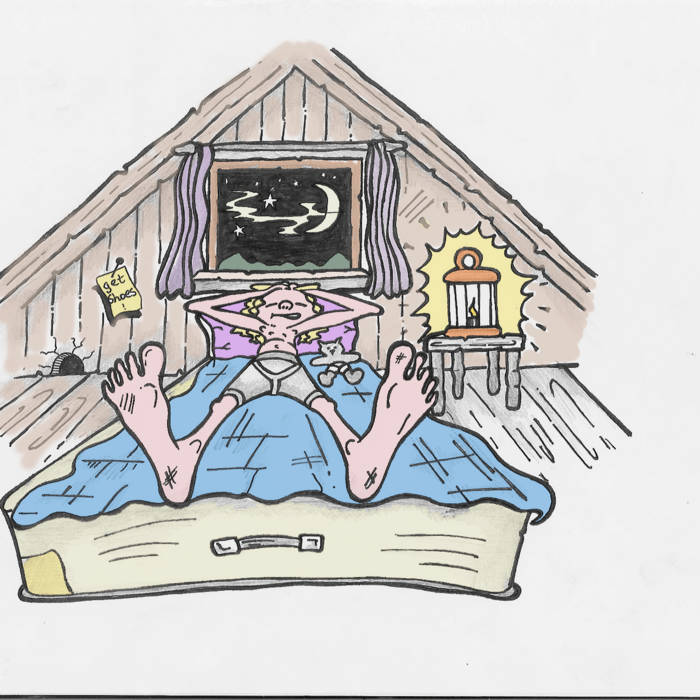 Toe or Chapter 1 of Ephram Fomp And His Bigtime Sandals

One fine day as Ephram Fomp was out digging for Noopas in his yard (Oh he did have a taste for Noopas), he heard a strange sound coming from a nearby Hoofty bush. Ephram’s ears perked up and he went to investigate, but just then his mother called him in for dinner.
“Ephram, come get your nardles!”
Ephram scurried into the house for dinner and sat down at the big wooden table. His father waddled in with a sour wince.
“Ephram, where’s your shoes? Your feet are a mess.”
Ephram glanced down at his feet. “But pop, ain’t no shoes fit me!”
“That aint no excuse, you wear em anyway even if your toes poke out. Listen, I want you to stay around the house; rumors flyin’ around that Sasquatch been in these parts.”
Ephram’s eyes popped wide open. “You mean Bigfoot?”
Just then a Zook fly landed on Ephram’s big toe, without even thinking the other big toe of the other foot reached over to swat it away.

That night as Ephram lay in bed, the moon peeked in the window and shone light upon Ephram’s big big feet - size 21 to be exact. “Aint no shoes ever gonna fit,” thought Ephram. “Oh well shoe is dumb anyway.” Ephram smiled and let out a big burp from his dinner. “Blurrpppp! Ha hee!”

The next day as Ephram was out playing, he remembered the Hoofty bush.
“Lets take a look,” Ephram said out loud. His big time feet swished and flopped on the ground as he walked.
“Oh My,” Ephram exclaimed, for under the Hoofty bush was the biggest pair of sandals he had ever seen. “Oh my! Whose could these be?”
They looked very worn in and were made of tan leather with big straps held together by large metal hoops. Shiny gemstones of all kinds were stitched into the straps and sole of the sandals. Ephram looked around, saw nothing and heard only the sound of the wind. “Might as well try them on,” he said. And they fit almost perfectly.
“ Ha hee mu muk muk muk !”
Suddenly Ephram felt very, very strange. It felt like the sandals were moving. They were! They wiggled Ephram’s feet and the straps on the sandals began to tighten down. And the gemstones seemed to be glowing.
“Hey, hey! What’s a happenin?” Ephram hollered.
He reached down to unbuckle the sandals but they wouldn’t budge.

The sandals made his feet walk forward, in a direction he didn’t really want to go: away from his home and into the forest of the big, dark, Two-Tongued-Trees. Ephram couldn’t control where his feet were going.
“Hey, Hey! Hey!” Ephram cried. “ I gots to get home. Pa’ll be redder’n a skinned rabbit! Lemme go!”
But the sandals kept taking him forward deeper and deeper into the woods. The hairs on his toes stood on end as his big time feet swished and flopped on the mossy forest floor.
“Where a-takin’ me?”
After a time Ephram stopped struggling and let the sandals take him. At least they seemed to know where they were going. “Oh, Pa’s gonna be so mad,” he moaned. “Big feet can’t do nothin’ right.”
The hilltops grew with a rosy light as the shadows deepened in the forest. The stones on the sandals lit the way through the woods. The smells began to change to a scent of old ancient stuff like the way grammas’ house smelled. The Two-Tongued-Trees were bigger than Ephram ever remembered. Seeping butterworts and semi-ovate squashes hung from the trees, swaying lightly in the mysterious breeze. “Oh my,” Ephram sighed.